More than 60 delegates to an International Church of Scientology conference here were arrested after a nine-month nationwide investigation.

After a police raid on their hotel, 69 delegates from around the world were initially held for questioning about alleged offenses ranging from fraud illegal currency export and tax evasion to coercion, kidnapping and forging official documents.

After a brief hearing yesterday morning, the investigating judge in charge of the case, Senor Jose Vaskuez Honrubia, released all but 20 of those arrested in what was the culmination of a nine-month investigation of Scientologist activities on Spain.

A simultaneous swoop on the organization's 30 offices in Spain, including its headquarters in the capital, is said to have produced a haul of about 300 internal files and financial statements.

According to the judge, there is evidence (gathered from extensive telephone taping) that the Scientologists - registered in Spain as a non-profit making religious body - had ill-gotten gains. The only God they worshipped, the judge said, had been profit: "The records show that their first objective was to make money…and their last was to make even more." 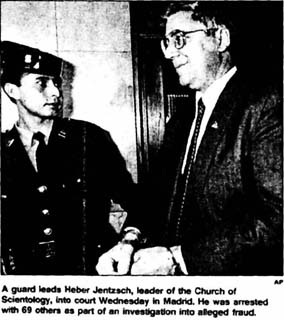 Among those detained was Mr. Heber Jentzsch, a US citizen said to be on the organization's central directorate. About 20 other Americans, plus, Portuguese, Swiss, Venezuelans, Italians and Danes had also been held. Most of those still detained yesterday are understood to be from Portugal.

The judge has indicated that he expects to announce more arrests shortly, after which the Scientologists' dossier will be handed over to the jurisdiction of the Audencia Nacionale, which deals with more important cases.

The first of the police investigations has been directed at the church's two main activities in Spain.

An organization called Narconon has been running "rehabilitation centers" for drug addicts, the judge said. The vitamin and mineral treatments cost L800 a month. The Scientologists' other money-making arm in Spain is alleged to have been Dienetica, which provided courses in "mental reconstruction" brain-child of Lafayette Ron Hubbard, the founder of Scientology.